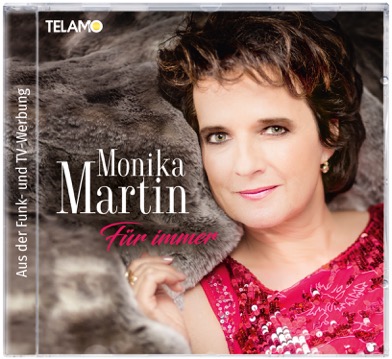 Monika Martin storms the charts in Germany, Austria and Switzerland with her new album „Für immer“!

A crystal clear voice, goosebumps guaranteed, and much warmth of the heart characterize the likable Austrian Monika Martin. To the highly emotional singer music is „a well that never runs dry“, and that’s exactly what she proves once more with a grand chart entry in three countries! Her new long player „Für immer“ breaks the official Germany’s Top 100 charts at grandiose place 7, in Austria it hits place 6 and with place 16 she reaches the highest position in her career in the Swiss album charts. In the German Schlager charts „Für immer“ reaches place 2. Monika Martin’s DVD with the same name „Für immer“ has catapulted itself to place 4.

In 1996 the singer born in Graz has her international breakthrough with the song „La Luna Blu“. Numerous TV appearances, chart placements, awards and honors follow. Monika becomes one of the most successful solo artists in her genre in Austria and belongs to the most popular Schlager singers in the whole German speaking area.

But the singer doesn’t rest on her laurels at all! The only thing that stays the same is change, this is known since ancient times. Monika also takes this motto to heart and her fans like her for that. With the new album „Für immer“ the versatile artist has reinvented herself anew, in music and in life, and nevertheless, one will always recognize Monika Martin in all she does, just the way her fans love it. Persistence and change - maybe it is this combination, though contradictory at first sight, which is the secret of her success.

Monika Martin will be back on a big tour throughout Germany in spring! For more information please visit Eventim and the tour plan on this page.

The new album „Für immer“ by Monika Martin is available in stores and as download since May 11th, 2018.